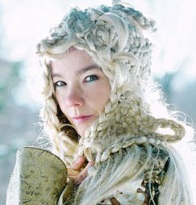 Many people have called David Bowie a chameleon, but he is nothing compared to Björk. She has gone through many transformations both physically (how she looks) and sonically (how her music sounds) since her solo debut in 1993 with Debut. Being from ReykjavÃ­k, Iceland, her accent and tonal voice goes against nearly all of western culture’s pop sounds. Here is the progression of her sound though each successive album:

So that basically wraps up Björk as an ever changing artist. Just go look at some pictures of her, and you will realize what I mean when I say that she is a chameleon. She is truely a musical genius who has remained relevant through the fickle tastes of pop culture that are constantly changing.