A Guy-Manuel de Homem-Christo helmet to be exact. This video made my day, and I love that DIY projects like this exist.

I think that I heard, back around the time of the Alive 2007 tour, that the real helmets cost thousands of dollars to make. Check the link below for a more detailed explanation of how this was done. 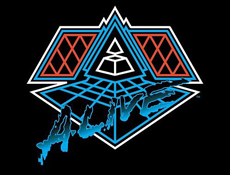 Remember that post I did a while ago about Daft Punk’s incredible concert at the L.A. Sports Arena? This is the review of the live album for that tour, not the actual experience of the concert. If you are a dedicated Daft Punk fan, I’ll try to have some info in here that interests you, but with this review I’m looking more to those who don’t “get” Daft Punk or what it (as a movement) has come to encompass. Let’s get the obvious points out of the way. 1) Anything Daft Punk does right now blows my mind. 2) This album is the epitome of an electronic live album. Here’s why:

I hope you have enjoyed my explanation/review of each track. If you agree or disagree with any of my points, feel free to comment!