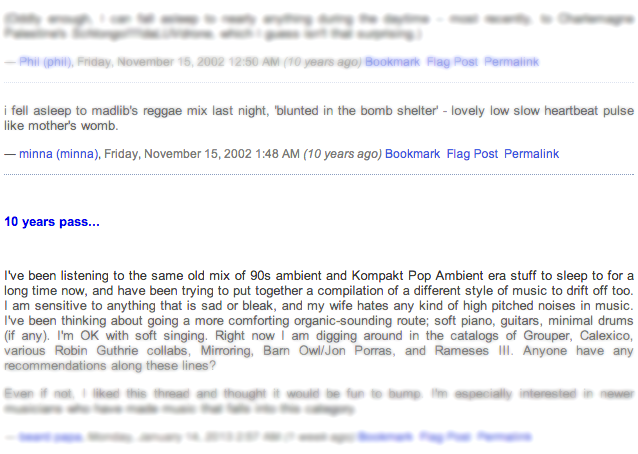 I think my favorite part of the I Love Music forums – besides the music jabber – is seeing the threads revived from so many years ago. People just pick right up and continue the conversation like nothing’s happened.

Update (1/21): I found another “10 years pass…” and this thread takes the cake. It’s called “does anything interesting ever happen in a yo la tengo song?“

Better late than never? I’ve sat on this list for a month now, pushing titles up and down a bit, but here it is: my 10 favorite albums of 2012. Looking back, I listened to a lot of pop, R&B, rap, and electronic music. Punk and metal moved further off my radar. Indie pop and rock sounded like a lot of the same to me. And I’m still holding on to the album as the definitive statement by an artist.

I’ve put together a playlist featuring one song from each of these albums, hopefully you enjoy some of it:

It was Genesis and Oblivion for me. Really, two of the best songs released this year. The rest of the album took a few months to grow on me. As this list attests,  I’ve been listening to a lot more pop music, and this album skews the furthest to left-field of the albums on this list.

By far the most agressive album that stuck in my head this year. If only this band had been around when I was in high school, I probably could have been saved from listening to Mindless Self Indulgence.

While it didn’t hit me like the poppier side of Bitte Orca did, Swing Low Magellan still manages to needle its way through me with songs that all stick together, though I couldn’t say what the glue is.

Some friends and I went to a listening party put on by NPR’s All Songs Considered early in the year, and one of the songs they played to us unidentified was Offspring Are Blank. But the moment David Longstreth voice was audible, it was obvious that the people who knew Dirty Projectors, knew this song. A room full of idiots grinning ear to ear because no one does weird guitars and weird vocals to make weird pop like the Dirty Projectors.

God it’s been an incredible year for rappers who aren’t afraid to throw out the out and make their own new. Le1f, Mykki Blanco, Zebra Katz, and Azealia Banks. I ate ’em up.

The only EP on this list, there really isn’t any getting around a release that has 212 on it. Then you add production from Machinedrum and Lone in there? Yep, that hits the spot.

A lengthy academic article could be written about Lana Del Rey’s 2012. It could cover sexism in the music industry, sexism in the media, the importance of (perceived) artistic authenticity, “going viral,” among other topics. I thought about these things after the SNL performance and the backlash that followed, and now that we’re “The Paradise Edition” removed from all of that, I feel the same way that I did when this album was released. It’s not the best, I mean – it has a song called Diet Mountain Dew on it – but it’s still pretty great.

If you were looking for an artist who took a hard left this year, Cat Power is your girl. Talk about a departure from past material; Sun was a breath of fresh air for me around mid-year. I’ve liked her previous output, but Sun went above and beyond all of that for me. It took what I’ve always perceived to be her singer-songwriter feel and put a serious percussive drive behind it that helped me finally “get” Cat Power.

I’m a sucker for anything Hot Chip does. I still remember the first time I listened to The Warning while driving around the windy backroads of Fallbrook and being floored at the immediate hit of Careful’s samples. Same thing when I saw that Made In the Dark was streaming online sometime my freshman year of college and immediately fell into the groove of Out at the Pictures.

In Our Heads is an exact culmination of Hot Chip today.  It’s warm, it’s danceable, it’s earnest. It has quick uptempos, slower ballads, and a couple seven-minute-plus songs that build and release with ease. More than anything, I just feel good when I listen to Hot Chip. Regardless of whether or not this statement has actual meaning: they’re a band I feel is real.

This was a sleeper hit for me. There was just enough hanging off of the edges of this album to get my interest. In my searches for the Julio Bashmore-produced 110% and what I thought of as “the original version” of Running – which I initially only cared about because of the fantastic Disclosure remix – I wound up listening to the rest of this album and slowly easing into the rest of the songs. Much has been said about R&B in 2012, but it’s not a genre I know too much about. I just know that if R&B keeps it coming in 2013, I’ll keep listening.

I can’t get my mind to break out of the comparison of good kid, m.A.A.d city to My Dark Twisted Fantasy. Sonically, they’re similar only in that they’re both rap albums. But I guess I link the two because Kendrick Lamar topped rap in 2012 just like Kanye topped rap in 2010.

I love Swimming Pools. I super love Backseat Freestyle. I could listen to the first four bars of that song on repeat for hours. But this is a complete album. There’s a minor narrative followed, and spoken recordings that *don’t* come off as over-production help tie it all together. Just like R&B, the rap playing field looked fresh and new this year. I’m looking forward to 2013.

This one is a classic. Or will be considered a classic. It will be near my top ten of the decade come 2020. I thought it was a 9/10 on first listen, but in the countless replays its received this year, its slid up a point without a struggle.

Who starts their album with the PS1 startup sound?! Who thinks that’s a good idea?! But it was; it gave me chills.

PS: where’s my vinyl version I ordered back in August? I want the real thing. Not a bootleg.