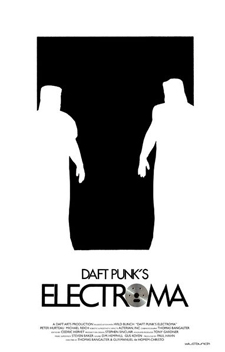 I must say that I was surprised by Electroma. After seeing the trailer on Daft Punk’s site and hearing that all spoken words were left out, I was worried that it would turn into some obscure metaphorical movie I wouldn’t get. Turns out I was wrong (well, kinda).

Electroma is the story of two robots (Hero #1 & #2) in the Daft Punk costumes wandering around the California desert when they arrive at the quintessential “Southwestern America” town, except for the part where every townsperson is also wearing a full Daft Punk outfit. In the initial driving scene you see the license plate that reads “HUMAN”, cluing you into the duo’s desire. After going through an external transformation to become human and the failure that follows, the final journey sequence depicts the self-destructing nature of their goal in which they both choose to destroy themselves rather than remain in robot form.

It’s a simple story of the desire to be something you’re not, and the consequences that follow. In no way shape or form is it an optimistic tale. All that junk about being who you want and making more of what you have is thrown out of the window.

Apart from the depressing subject matter, I really enjoyed the film. I disagree with the claims that the scenes are drawn out far too long. But if you go into this movie hoping for some sort of a candy coated picture that looks like Discovery sounds, you will be sorely disappointed. Don’t get me wrong, Electroma looks beautiful, not because the colors are popping out, but because of the composition Bangalter puts together with the various cut views of each scene.

On top of the amazing picture, the music featured in the film fits perfectly. None of it is Daft Punk music, which is surprising at first, but no Daft Punk music would really fit in here. The music used isn’t really odd, but it’s not mainstream music either (just like the movie). Although I know that a soundtrack won’t be coming out seeing as the movie is only about an hour, I’m going to try to research what songs are in it because each and everyone is sick.

This is a movie that tells a simple story in a very abstracted form, but it’s not hard to understand. If you can view Electroma not wanting to be entertained the entire time, it will be an enjoyable film for you too.