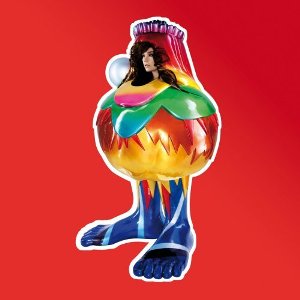 Björk’s new CD… For me, Volta has been the most anticipated album by Björk. Hyped press and intriguing interviews combined with her show stopping performance at Coachella really put me on end for Volta to be released. The first few leaked songs gave me hope that it would have the feeling of Homogenic with the pop sound of Debut, something that I feel Björk needs to reinvent. So in a nutshell, how does Volta make me feel? Half-fulfilled.

I was so ready for a more accessible album by Björk; something that I could show my friends and not get the “I don’t get it” looks Björk instills in so many people. From what I heard at Coachella, Volta would be exactly that. Her old greatest hits with “Earth Intruders”, “Innocence”, “Wanderlust”, and “Declare Independence” thrown into the mix gave the impression that Volta would be a more “up” album than the murky Medulla. Even Björk’s interview with Pitchfork has her saying that it would be a “fun” and even “poppy” record; this is not the case.

The album does feature a heavy dosage of brass; I’m not too sure that it’s beneficial. Because so many of the tracks do rely on the horns for their warm ambient tones, it limits the sound that I have come to know as Björk. One plus side of the brass is that they make their tracks seem fairly immediate. In one of her video interviews, Björk describes Volta as being fairly spontaneous; the brass section contributes quite a bit to this end.

Here’s a paragraph dedicated to my favorite song on the album: Innocence. But first I must admit my guilt at enjoying the two Timbaland collaborations the most. Now that that’s out, Innocence packs a major punch. In case you don’t believe me, just listen to the track; one of the samples used sounds like a guy getting punched in the gut. The beat here is insane. It is very repetitive, but that is something that I like about the track. In addition to the sweet but short beat, the main synth is sweet, if not sweeter than the beats. It is a very wobbly tone to it and its high pitched distortion give it a unique sound that I have never heard before. To me, its what an Asian synth would be if someone took it and applied every kind of degrading effect on it (and if there were synths for difference places of the world). The lyrics are very nice as well, but the music is what I love about it.

As you can probably tell, I have very mixed feelings about Volta. The slower tracks don’t grab you like “Hidden Place” or “Unravel” do, but the more upbeat tracks are unforgettable. I give Volta a slight-medium thumbs up (that is a technical term in case you aren’t familiar with the nikgomez.com rating system…)

First statement: Trent Renzor has redeemed himself. While I didn’t think that With Teeth was a horrible as the rest of the musical community, this album surpasses it with ease. The statement that Trent has erased the ideas of pop music seems to be on target here.

Year Zero is nothing like With Teeth, so if you were hoping for a repeat, you’re out of luck. As far as comparisons go, I have read that this is NIN’s most minimal album to date; this is a claim that I have to disagree with. Pretty Hate Machine still holds that title. While Year Zero does have its fair share of simple songs, nearly every one develops to a point that is hardly minimalistic in nature. If any song was to be described in this manner, it would have to be “My Violent Heart” which eventually disintegrates in the chorus to a mash of distorted vocals and glitch electro beats (love it.)

What really pleased me about this record is the amount of depth that is has in terms of variations throughout the progression of songs in the album. No two songs are very alike (unlike With Teeth.) That being said, this record is not very commercially appealing. The songs are very dirty and noisy; it is a return to where NIN started. So far, “Survivalism” is the only single that has been released. Probably one of the most pop-friendly tracks, it still features dirty guitars and drum machine beats torn to shreds under Renzor’s moaned verse vocals and strong chorus lines.

Putting the music off to the side, if you haven’t heard of the amazing marketing campaign that has been executed by Renzor, I’m not sure where you have been. Whether the secret “lost” USB drives carrying new tracks, hidden websites revealing album information, or phone numbers playing new tracks from Year Zero, the RIAA has had a field day determining whether they should prosecute people with the “leaked” tracks or not (as usual, they did.)

This album is up there with Pretty Hate Machine and And All that Could Have Been [Live] for me. It offers so much more than radio friendly songs.