Since I graduated, I’ve been on something of a reading binge. Santa brought me a Kindle for Christmas, but up until recently, all I’ve used it for is reading long articles that I find online (Instapaper is a great service if I may say so).

Here’s the rundown of what I’ve gone through (in semi-chronological order):
Bossypants by Tina Fey
Room by Emma Donoghue
The Little Prince by Antoine de Saint-Exupery
The Giver by Lois Lowry
The Gunslinger by Steven King
Ender’s Game by Orson Scott Card
The Drawing of the Three by Steven King
The Life of Pi by Yann Martel

Bossypants was hilarious. I love Tina Fey, so I enjoyed reading her first-hand account of start at SNL, how 30 Rock came to be, and her subsequent return to SNL to do the Sarah Palin bits.

Room has been on the best-seller lists for a while now, and the premise of a mother and son living in a room (written from the 5 year-old’s point of view) intrigued me. It was a great read, and I’m always game when an author is willing to sully the purity of a protagonist.

The Little Prince is a kids book. But like all of the best kid stuff, there’s plenty of depth for an older crowd to dive into. I was given this book as an end-of-year gift by a friend from school; it’s his favorite book. I can definitely see how if I had an attachment to this from my childhood, this story would stick with you for your lifetime. I loved it.

The Giver was a re-read, but I’d like to think I got more out of it this time. I don’t remember connecting so much with the bigger themes or messages when I read it as a child.

The Gunslinger and The Drawing of the Three are the first two parts of Steven King’s seven-part Dark Tower series. They are not horror in any way/shape/form. On the contrary, they fall into some weird combo of the western, fantasy, and action genres. I think they’re good, but not great. Actually, The Gunslinger was just OK, but I think the series builds on its momentum, so I think I’ll keep going.

In other news, I’m in Turkey on the second leg of my travels. I’ll give a quick update of Hong Kong (amazing) and Singapore (less so) soon.

I’m in Boston for my last spring break ever. I promised a friend that I’d eventually come out, and although it took me four years, I’m here. We spent the past few days in New York. I lived in the East Village and Lower East Side during the summer of 2009, and I learned then why people never leave. 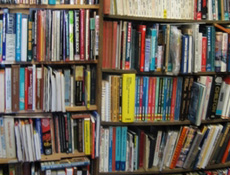