I’ve gone through this album a couple times now. I love it. There are left turns all over the place. And not that Jamie xx deserves all the credit for the sound that The xx has carved out  for themselves, but he is certainly something to be respected on his own.

On a recent trip to Amoeba Records, in addition to the records I wanted, I picked up a few $.50 singles sitting on the ground in the clearance bins to see what I’d get. The first of those singles is this horrible remix of Destinys Child’s “Say My Name”. As you can see, this record’s label only had the song’s title printed, and the sleeve it came in was plain and white.

Because I grew up with top 40 radio in the 90s, I knew the song, but I had no idea there was so many remixes and edits of it (one of which features Kobe Bryant rapping.) Because the label only says “Say My Name,” I tried listening to every remix of the song I could get my hands on to find the remixer but to no avail. Here it is for your listening horror: Destinys Child – Say My Name (Unknown Remix)

I also picked up this single of a Basement Jaxx remix of Kelis’ “Trick Me.”As you can see, whoever owned this record before me wanted to make sure that no one ever played this single as a 33 (which I did) and kindly wrote “45” on the label.

The original song is a highlight of its album, but I feel that this remix doesn’t do Kelis or Basement Jaxx justice. If it had been done some no-name DJ, I might say it’s an acceptable remix clearly just meant to make the original playable on the dancefloor, but this is Basement Jaxx we’re talking about here. The single came out fairly soon after Kish Kash, so I’ll brush this off as the Jaxx having used all their creativity at the time on their own album: Kelis – Trick Me (Jaxxbackclash Rerub) 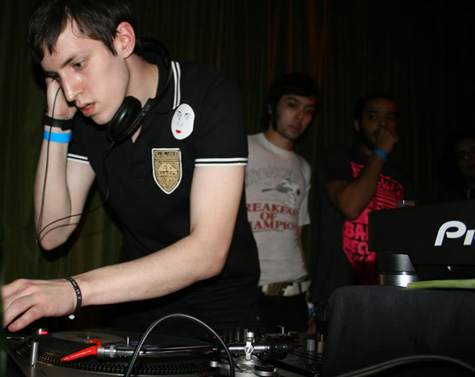 Please, before you read anything here, click on that link below and listen to the song. It is a remix of Rage Against the Machine’s Killing In the Name Of by SebastiAn.

Now that you have been blown away by yet another artist signed by Ed Banger Records, let me elaborate on my feelings/reactions to the song. Let me begin by saying that I love Rage Against the Machine (RATM). You probably know this if you have read any other stories here about RATM (notably at Coachella). Secondly, I love SebastiAn. Ross Ross Ross is a record that I can listen to start to finish and love every track on it.

In no way, shape, or form is turning a funk metal track into a dirty electro track an easy task. But somehow, SebastiAn does exactly that without compromising the track’s original style or his goal of making an amazing electro song. Even though the lyrics are replaced by different sources (there are only 6 lines of lyrics in the original song anyways), the sources he uses are very fitting, complementing the track throughout. The distortion is appropriate and calculated. Thank you SebastiAn for making one of my favorite metal rebellion songs into a great electro track. I hope to hear it played at the Daft Punk/SebastiAn/Kavinsky concert I will be going to in LA next month.