“They tried to make me do the Oscars, I said ‘No, No, No’.” Of all the banter M.I.A. threw into her hour-long set on the Main Stage at this year’s Coachella, this was probably the most pointed. When Amy Winehouse dropped off the lineup because she couldn’t get a Visa to the United States (surprise, surprise), M.I.A. was quickly announced to be her replacement. In my mind, there could be no better choice. I’ve missed the chance to see M.I.A. twice now, and I made sure not to pass her up again.

I’ve been an M.I.A. fan since Arular came out, and like everyone else,  Kala was one of my favorite albums of 2007. I know all the words to all her songs (well, at lease those that are audibly decipherable). You can imagine my disappointment when I found out that there aren’t as many people like me as I thought. Apparently, tons people are willing to stand around for an hour to hear one song. I really hope that the masses can get over “Paper Planes” and realize the true genius in all of M.I.A.’s songs.

Aside from that, the show was one of my favorite all weekend. Six neon glow-in-the-dark dancers started things off and led right into M.I.A.’s entrance at a podium rapping “World Town.” The party went on from there as she flew threw Rye Rye’s new song “Bang”, “$20”, “Boyz”, “Bingo”, “Sunshowers”, “Pull Up the People”, and “Galang”. A perfect set list.

Also included in her set was “Bird Flu”. Last year, M.I.A. only got through six songs in the Mojave tent because she wanted people to get up on stage, but the security guards thought otherwise. This year, she would get people up if it was the last thing she did. She called out, “I’ve already been banned from Coachella once, let do it. Hey hey, let ’em up! Let ’em up!” And something clicked in my brain.

In short, I jumped over the center barrier, ran as fast as I could towards the stage, got body checked into another barrier by a 300 lb. security guard, ran so as to not get thrown out, and jumped over another barrier back into the crowd. I didn’t make it onstage, but I did make it to the front row of the show. To those people who did make it onstage, good on ya; I hope you enjoyed yourself. I know I enjoyed my fleeting moment of excitement.

After “Bird Flu” came “Paper Planes.” And of course the crowd went wild for the one song they’d heard on TV and on the radio. While I’m still bitter that M.I.A. hasn’t received the mainstream success she deserves, I’m appreciative that anyone knows her music at all. It’s not everyday that a Sri Lankan girl with paternal ties to the Tamil Tigers makes it onto American radio waves.

I had a great time during M.I.A.’s third Coachella performance, and in the end, that’s what counts. That being said, if you ever go to one of her future shows, please listen to some songs that aren’t “Paper Planes” before heading out. 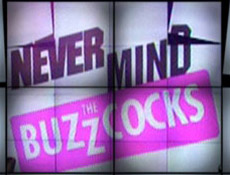 Now that we’re truly feeling the effects of the writer’s strike, unless you’re willing to give up TV or start watching horrible shows, it’s time to find new shows for your viewing pleasure. Never Mind the Buzzcocks (NMTB) is one such show. The only problem is that it’s on BBC2, so I have to watch it on YouTube.

The show’s current incarnation consists of host Simon Amstell, team leaders Phill Jupitus and Bill Bailey, and four other guest contestants (two on each team). Guests are usually consist of current indie music stars, past has-been music/tv/movie stars, or and other people who can be made fun of. While this sounds like a game show, think of Whose Line Is It Anyway. That’s how gameshowy NMTB is.

There isn’t much to NMTB, and all I can say about it is that it consistently provides for the funniest half hours of my day. Simon Amstell teamed up with the two regulars play off of each other and the guests excellently. Just picture them making fun of Amy Winehouse in her semi-inebriated state not completely aware of what’s going on around her. Need a taste? Here’s a collection of the best moments of the episode she was on:

If you don’t find that funny, I’m sorry for wasting your time and that you don’t have a good sense of humor. I can’t say enough about this show. It’s funny, teaches me about good music, and gives me indie cred… Indie cred is always nice, right?