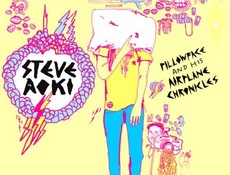 I have never been to a concert/festival like the Neighborhood Festival, but I can assuredly say that I will go again next year. Here’s the premise: Steve Aoki puts together this indie festival of artists on his label and his friends who just put on amazing shows. I’ll just give a rundown of the artists I saw and listened/danced/rocked/jumped to.

Starting off the day (around 3:30) was Funeral Party. I’ve never heard of them before, but they are the epitome of an indie scene punk band, complete with synths and a great bassist. They have great style and put on a great show. For opener, they started things off on the right foot.

Next up were Andre Legacy and Dirt Nasty. Two rappers who couldn’t write a serious verse if their lives depended on it. Then again, no one was in the mood to listen to some hardcore deep rap, so they fit in perfectly. Hilarious and off-color.

I believe that Squeak E Clean followed. Again, an artist (actually a DJ) who I’ve never heard of. Simply stated, starting off with MIA is a sure way to my heart. Following with some Justice, Daft Punk, Klaxons, Hot Chip, and other great electro kept me all ears throughout his entire set. First real DJ set I’ve watched and paid attention to, it was a great mix.

It got confusing here because I thought that Guns ‘n Bombs was up next, but only Johnny Love came out and started to spin some heavy noise glitch stuff when something went wrong with the needles. They weren’t playing something right and when he’d fade to one of the tables, it’d cut out. Odd, annoying.

Har Mar Superstar. What a show. I’m not saying I liked it, I’m still not sure. It was outlandish to say the least. I’ll leave it at that.

Here’s where the good stuff comes in (read: the DJs/rappers/artists who I’m familiar with). Flosstradamus came out and the crowds gathered (it was around 5/6ish). How they mix electro with hip hop and mainstream tech house is beyond me, but it works perfectly and the crowd loves it. I forget what the mix was, but they just went straight into Big Pimpin’ from an electro song. WHO DOES THAT? Pure genius.

So J2K stayed on the decks and Autobot went out onstage to meet Kid Sister who put on an amazing performance. Kid Sister is an amazing rapper and she puts on an incredible show wherever she goes (at least thats what I’ve read and seen). Following in the footsteps of MIA (as many female rappers are right now), the energy in her shows is so high and she’s all over the whole stage the entire time.

Moving away from hip hop/rap, we go to Crystal Castles. I don’t know who did the lineup, but I guess they had to throw them in somewhere. This 8-bit massacre tore the crowd to shreds. Probably the most hardcore artist here, even though their genre/classification falls somewhere in-between electropop and 8-bit industrial.

Back to the DJs. Steve Aoki (the creator of all of this) was up next. Again, mixing the electro with mainstream tech and some Yo Majesty! (I’m pretty sure it was Aoki who threw them in there). Somewhere amid Daft Punk’s Television Rules the Nation and Steam Machine, Aoki become possesed by some DJ gods and decided to stage dive into the crowd, something I’ve never seen a DJ do. It was amazing, he got passed over me, and like a good crowd, we got him back up onstage just in time for the next song to come in. Incredible. And as a side note, it was pretty cool seeing all of the artists playing at the festival come onstage for Aoki just to show their support for him.

Wrapping up the DJ set was DJ AM who kept the electro going for his 40 minutes. Good mix, not too eventful though.

And the heavy hitters are now ready to perform. Chromeo was next to take the stage openning with the intro to their latest album, it was obvious that this would be the funkiest performance of the night. They kept the crowd dancing for their entire set and it was sweet when we all started chanting “2 step, 2 step, 2 step” for the best song: Fancy Footwork. It took a couple more songs to get there, but they finally closed with it, and every just went insane. I’ve never really been in a crowd where the intention is dancing, not moshing. It’s a nice change of pace.

Wrapping up my night (I left a bit early) was a knockout lineup of Spank Rock, Amanda Blank, and Santogold. Amanda Blank and Santogold are two girls who are also following in the path the MIA has laid down for indie female rappers. Spank Rock got big at the same time as MIA, so I figure that they are equals in terms of innovative sounds. Yet another great set that kept the crowd going until their 40 minutes were up.

Mickey Avalon took the stage next, but I had had enough. My feet were killing me, and Avalon isn’t really up my alley of musical tastes. I decided to call it a night, it was time.